You are here: Home / Challenge / 7 Weeks to a Better Marriage Week 4A – Fighting the Good Fight 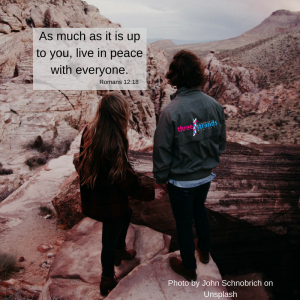 She and her husband had joined the church and I was excited to welcome them.  She had been in my middle-school youth class years prior and I was excited that they were joining the church as well as preparing for their first child.  She was all smiles as she and her husband approached the front of the church, the frock she was wearing showing early signs of the baby soon to be on the way.  Patty and I approached, hugs were given all around and I asked “when is the baby due?”  The following week my first amendment rights had been revoked by our senior pastor.  Michael could not comment on future babies until someone else verified the young lady was pregnant.  You guessed it, she was not pregnant.

The funny thing is I knew I was in trouble as the words left my mouth.  Mentally I was reaching out trying to capture the offending question and return it to the depths from which it came.  No luck.

Please tell me I am not alone.  Tell me that there have been times when you placed your mouth in motion before placing your brain in gear.  I have done it often, and many times it has been with my wife.  I have made a statement that was unloving, unkind, or just plain stupid.  Of course, then you have to defend yourself, justify your words, and then the cycle begins.  Yep, it’s on like Donkey Kong.

Yesterday, we talked about The “soft approach” to starting conversations that often result in a ore effective interaction.  After three plus decades of marriage research John Gottman, from the University of Washington, was able to identify a number of strategies that help when couples are already engaged in a fight.  One of those strategies involves repair attempts. A repair attempt is any statement or action – verbal, physical, or otherwise — meant to diffuse negativity and keep a conflict from escalating out of control.  Sometimes they are silly, sometimes they are simple, but the goal is to take action prior to the conversation deescalating into insanity.  Let’s look at an example:

Janet comes into the bedroom after balancing the checkbook, looks at Steve and says, “I can’t believe you spent $250 on ammo last month.  You always spend money on things we don’t need.”  Steve responds angrily by saying, “How about that $100 mani-pedi you paid for yesterday, I am sure you really needed that.”  Janet, recognizing things are spiraling out of control responds by saying, “OK, guilty as charged.  But I am really getting concerned about our spending.”  The last sentence is a repair attempt.  She can see him getting upset and realizes she made a mistake by using the term “always.”  Further, she allowed him to see what the real issue was, her concern about overspending.

Repair attempts require some level of maturity and self awareness.  The idea is that when someone sees the conversation taking a negative turn, they step up and de-escalate the confrontation.  Some people use a “time-out” (*see below) to give both parties time to calm down.  Other couples use “code-words” that indicate they need their partner to tread lightly.  Some simply bang their head against the wall indicating how frustrated they are.  I have recently used the statement “I’m sorry, stupidity just leaked out of my mouth, let me try that again.”  Whatever the method, when a repair attempt is successful, both parties can take a deep breath and take a mulligan, a golfing term meaning a second attempt at no cost to the player.

If you have never tried this type of deescalation, it may take a little practice and feel uncomfortable when you first start.  If you are one of those who want to win at any cost, even when you are wrong, it may require a change concerning what “winning” means.  In other words, you may have to rethink and realize that winning is whatever you have to do to maintain unity instead of discord.  Here are some terms you may want to consider using when the need arises:

Using these terms may feel a little uncomfortable at first.  It is a new way of communicating that most people never learn to use.  Of course, a majority of people today  end up divorced.  Learning to use and recognize repair attempts can go a long way towards making your fights an opportunity to grow together in love instead of undermining the love and respect needed for a long term relationship to grow.

*A time-out is a great tool for discussions that have turned negative.  Here are a few rules: